After the great success achieved by Ubisoft after the release of Rainbow 6 siege, which was considered one of the best tactical mission games when it was released even after many years, this success had to be invested in releasing another title in this series. 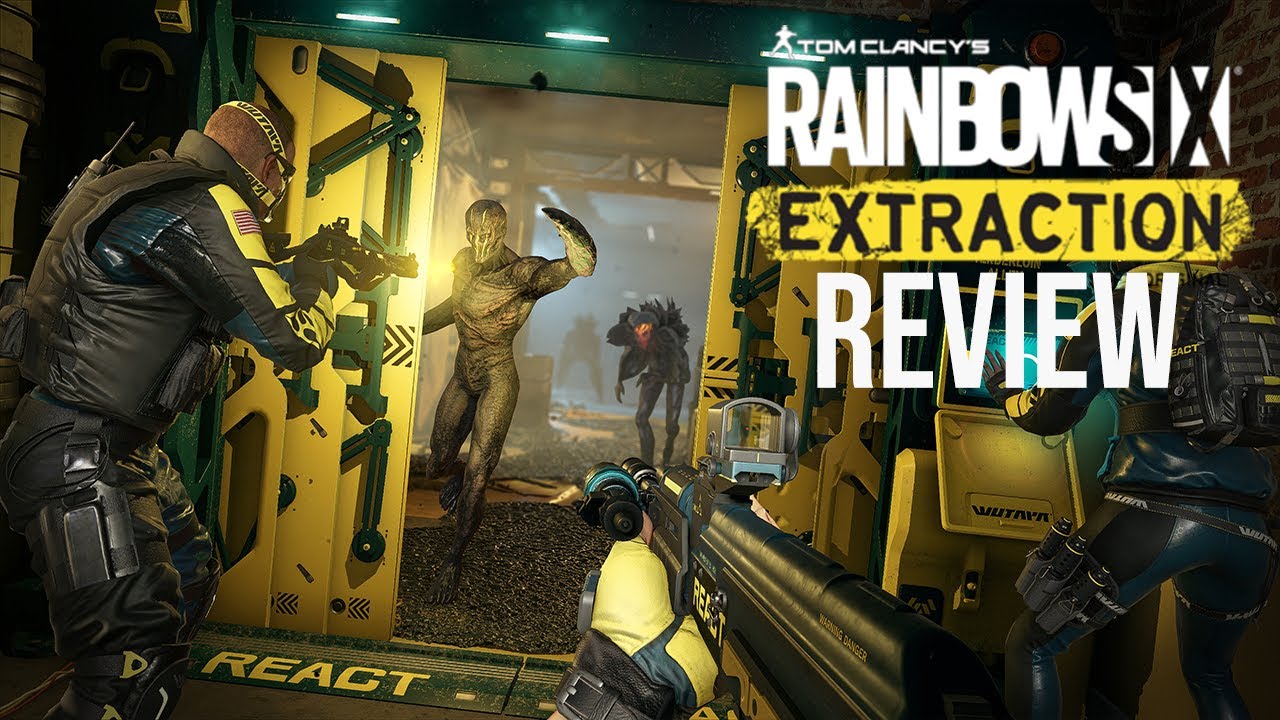 Rainbow 6 extraction is a tactical first person shooter game based on cooperative gameplay that allows you to form teams with 1 to 3 agents to complete the tasks required of you in each level in a purely tactical style. Required of you without or with the least possible losses.

A meteorite crash near led to an outbreak of Chimera parasites, and the Rainbow team responded to it, but after a short period of time those parasites reappeared in several locations in the , but they are now more deadly than before and faster spread and spread.

These parasites are almost unknown, and here comes your role, represented by a REACT client, to confront this threat, and even gather information about it, know the ways of its spread, eliminate some of its elements, and also rescue some of your colleagues or important researchers from it and bring them to safety.

I think that the story is medium and did not present anything new in its kind, whether about its plot or even through the narration, as it is considered repetitive, but that does not prevent that it formed a good framework for the events of the game.

It is reported that the story almost disappears after the first cinematic presentation of it, and the events of the game are completed in the form of presented information, nothing more. I think that it would have been better to present a separate phase of the story from the online phases.

A good number of game maps

The game takes place in four main cities, including , and , and each city is divided into 3 sub-regions with a total of 12 maps, which is a good number of maps.

The maps are very well designed and each of them has a special character and distinctive features that differ from the other. The character of the game has also been given the elements of the outbreak, whether from the nests or membranes of parasites and others very well, which makes you harmonize in the atmosphere and events of the game story very well since the start.

The events of the game start on the map of , and you will have to raise your level and gradually rise to unlock the rest of the areas and maps, respectively.

A very large number of customers, but without renewal!

The game allows each member of your team to choose his own agent to do the task, and each agent has abilities that are different from the other customer. The number of clients is 18 clients! Which is a very good number but if you are a Rainbow 6 siege player you will find that all of them have appeared in the events of the series before and there are no new agents added to the game.

Despite that, the diversity of customers is very clear, and each of them has a role that differs significantly from the other. For example, Agent SLEDGE is distinguished by his strength and his hammer that makes him able to penetrate and surprise enemies, while Agent Alibi has the ability to make a hologram of her that works to distract enemies to give the opportunity To the rest of your team members to eliminate them or to accomplish the tasks required, and so on, each client has capabilities and advantages that are different from the other client, and each player in the team must choose his client accurately to suit the tasks required and to serve the rest of the team members.

Three is better than one!

The game allows you to form teams starting from one to three people, but it is not recommended to play the game alone, as the game may take on a completely different character. Which will make you lose your customer sooner or later.

Cooperative method is the perfect solution!

The game clearly encourages you to play in a group manner and punishes those who play randomly. You must calculate every step you have, starting from choosing your customer or the tools that help you during the completion of tasks to the way you play within the tasks and implement them, finish them and exit them in a successful and cooperative manner, because The slightest mistake may expose you and your team to severe danger, as you may find yourself surrounded by a very large number of enemies and the spread of the parasites’ membrane around you, which will make your movement very slow and will make the enemies’ movement fast, which will give them a clear advantage and will increase their number and you will find them surrounding you from Every angle and direction, which will make your team lose completely, or at least you will lose one of its elements, which will cost the team and put it in an unenviable embarrassment, as the team is then forced to return to one of the stages of the mission and rescue the customer who fell, and one of the team members must carry the scissor agent In the rest of the task until the exit is successful, otherwise you will not win and will not complete your task successfully.

Also, you will not be able to play with the customer who has fallen until after a time until it is healed or until you open it again while playing, so you must get used to playing with more than one customer because sooner or later you will lose your favorite customer.

Three basic objectives are determined to be done in order to be able to bypass each stage, and after achieving each goal, you are entered into a safe room in order to obtain the various resources you need to complete your mission. In playing to achieve the next goal, but the difficulty will increase and thus also double your rewards and so on.

The types of enemies are clearly varied, amounting to about 13 types, and each of them has special abilities that will make it difficult for you to play. For example, “the grunter”, which is characterized by a very high running speed, or “the hacker”, which carries an explosive cam on its back if it approaches you But it is also a weakness that you can exploit if he is close to his allies, then you can blow that hump and seriously harm your enemies.

One of the features of the game is that the parasites that represent your enemies are almost constantly evolving. As you rise or advance your level, you will find that your enemies will increase their difficulty significantly. You will also notice new types of enemies that will appear to you and will be difficult for you to overcome, which will make the game playable for a longer period, for example when you replay a task After you level up, you will not find it as easy as the first time, but it will become noticeably more difficult. The process of developing Chimera parasites is almost a process parallel to the process of developing your rank in the game. The more powerful you are, the stronger your enemies will be.

The game contains a large group of weapons, numbering about 65, and differs greatly from the weapons of Rainbow 6 siege, whether in functions, accessories, or in the development processes that the game provides to you to enable you to make it more lethal or quieter to help you complete your missions with minimal losses And without making much of a fuss.

The game also contains 25 tools that you can choose what to carry with you before the beginning of each stage, approximately 10 tools were present in Rainbow 6 siege and 15 other tools, including the drones that you use to see your surroundings or to discover the environment around you, smoke bombs or other tools manifold.

In general, the experience of weapons and shooting is an experience that I enjoyed greatly. Shooting is characterized by smoothness and realism, the recoil of each weapon, its damage effect and its sound effects, all of which will provide you with a very satisfactory shooting experience.

The game contains the so-called end-game content, which adds excitement above the excitement to your experience of the atmosphere of the game and is more difficult, for example, the maelstrom phase is a more complex stage than the natural stages of the game, and requires you to pass 9 goals instead of only 3, and each time the difficulty of the game increases More than that, it is a very difficult stage that requires professional players and also requires that you choose your equipment very carefully in order to pass it, and in return you will get many rewards and greater customization items, whether for weapons or for the appearance of your client.

The game allows you to repeat it an infinite number of times with changing enemies each time and changing places and ways to achieve your goals, which are approximately 13 goals that are chosen randomly with the possibility of making teams consisting of 3 agents from about 18 different agents, which gives you approximately 600 different installations For the elements of your team and the methods of completing each task based on the capabilities of each client and employing them to serve the completion of your task.

All of these factors provide you with a good gaming experience and keep you away from boredom even after a long period of playing.